How History Is Repeating Itself for Haitian Migrants Trying to...

by khbrknews.com 1 year ago1 year ago
0views
0


In the past 11 years alone, Haitians have suffered natural disasters, rising gang violence, outbreaks of cholera and COVID-19, and political instability, including the recent assassination of President Jovenel Moïse. The crises left many in the hemisphere’s poorest nation feeling they had no option but to leave—despite the difficulties they face in fleeing to other countries.

In late September, Americans were confronted with the reality of those difficulties too. An estimated 15,000 people arrived in Del Rio, Texas, during the month, below a bridge connecting the city to Mexico’s Ciudad Acuña. A majority were Haitian nationals, migrants and asylum seekers who ended up living in tents or under tarps, in conditions similar to those in other camps that have formed along the U.S.-Mexico border in recent years.

Read more: Caught Between U.S. Policies and Instability at Home, Haitian Migrants in Tijuana Are in a State of Limbo

On Sept. 24, Department of Homeland Security (DHS) Secretary Alejandro Mayorkas announced the camp had been cleared, just days after mounted U.S. Border Patrol agents were photographed confronting migrants attempting to cross into the U.S. to make asylum claims. In now-viral photos and video, an agent appears to use his rein and horse to trip a migrant, who falls back into the waters of the Rio Grande. Public anger over the image was immediate. The Biden Administration condemned the Border Patrol agent’s actions, while Mayorkas announced that border agents would stop using horses and that an investigation was underway.

But if the images were both shocking and new, immigration historian Brianna Nofil recognized something familiar in them. “They fit in a longer pattern,” Nofil says—a pattern that she says has “enabled the U.S. to build this really dramatic detention and deportation system with the intention of keeping Haitian migrants out.”

The founding of the U.S.’s first modern-day detention center, Nofil says, can in fact be largely traced back to an earlier influx of Haitian migrants, who arrived in the U.S. in the 1970s hoping to claim asylum after fleeing political instability. An estimated 56,000 Haitians arrived in South Florida in that decade, straining city and county jails past the point that local officials could manage. In the decade to follow, an additional 185,000 arrived.

During the 1970s the U.S. government was debating whether to create a specific detention center for immigrants. “People in Congress were like, ‘I don’t think we can pull this off, the optics are so bad, and we’d only be detaining Black migrants,’” Nofil says. “A lot of policymakers thought that was going to be sort of a bridge too far for the American people.”

The turning point, however, came in 1980, when Fidel Castro announced he would allow Cubans to flee the country if they wished, including inmates, stoking fear among Americans. The event would later be called the Mariel Boatlift, and an estimated 125,000 Cubans arrived in the U.S April and October 1980. César Cuauhtémoc García Hernández, a law professor at Ohio State University and the author of Migrating to Prison: America’s Obsession with Locking Up Immigrants, says to picture the movie Scarface (released in 1983) an entirely fictional story with a made-up main character, but many Americans perceived incoming Cuban asylum seekers as this caricature, as the “worst of the worst of Cuban society,” he says.

Some thousands of migrants take shelter as they await to be processed near the Del Rio International Bridge after crossing the Rio Grande river into the U.S. from Ciudad Acuna on Sept. 18. Picture taken with a drone. 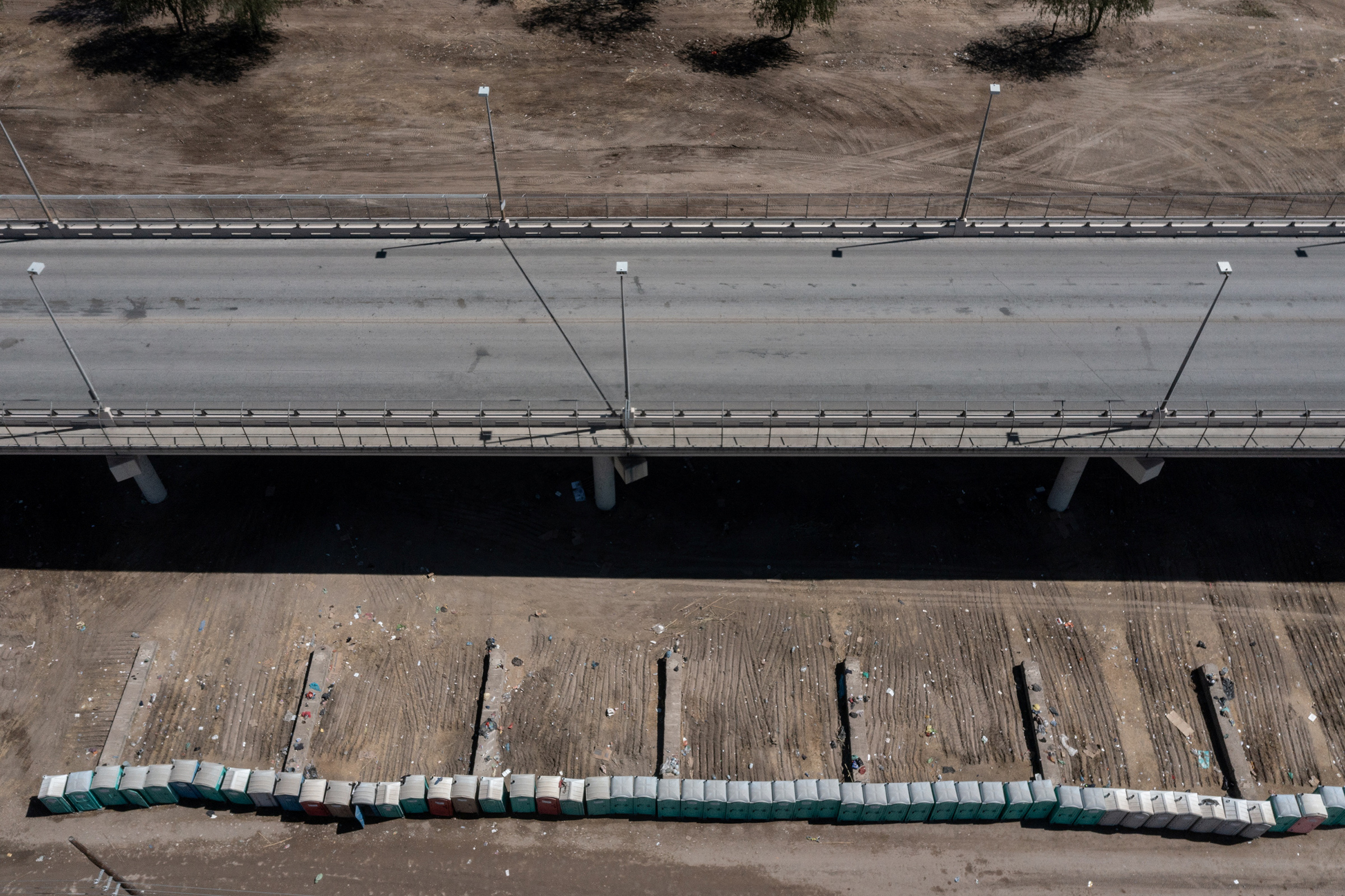 In this drone image, the makeshift migrant border camp near the Del Rio International Bridge is seen after it was cleared, on Sept. 24.

In response, the Carter and Reagan administrations opened several detention centers for immigrants, the first of them near Miami in 1980 to house Haitians, as well as Cubans who had flooded into the country after Fidel Castro announced that year that he would allow them to leave. While the facilities were described as “temporary” fixes at the time, that first one is still functioning today as the Krome North Service Processing Center. Nofil notes that at Krome, Haitians lived in “much more dire” conditions than Cubans.

“[Immigration policy] differs with every president,” García Hernández says, “but the models came from this period when we were targeting Haitians. Same thing with facilities like Krome, we built up these detention centers on the backs of Haitians and Haitian migration.”

The news today is in Texas, not Miami, but the U.S. approach to Haitian asylum seekers has not changed. Then and now, Haitian asylum seekers are often met with force, and their asylum claims with skepticism, says César Cuauhtémoc García Hernández, a law professor at Ohio State University and the author of Migrating to Prison: America’s Obsession with Locking Up Immigrants. “Unfortunately, I think we’re seeing a newer version of a very similar phenomenon in which federal immigration officials take a heavy-handed policing approach,” he says. “And they simultaneously cast doubt on any claims to asylum that Haitians are bringing.”

Read more: First Came an Earthquake. Then a Hurricane. Now, Haiti is Bracing for an Outbreak of Disease

With the camp in Del Rio cleared out, DHS has moved some of its residents to locations south of the U.S.-Mexico border, and some have been able to enter the U.S. to have their asylum cases heard. Others, however, have already been sent back to Haiti, many under Title 42, a controversial measure that the Trump Administration used, citing COVID-19 risk, to expel asylum seekers before granting them hearings. If Haitians are caught by U.S. immigration officials, they are typically sent back to their home country, not to Mexico like many other migrants, even though many had earlier emigrated to Brazil and other South American countries and have not lived in Haiti for years. By some estimates, the Biden Administration has already expelled more Haitians back to Haiti, without granting them the opportunity to present asylum claims, than the Trump Administration did: more than 2,000 have been flown to Haiti on deportation flights, according to DHS.

To those aware of the history, these numbers can look like evidence that-—despite the outcry—past trends will likely continue to hold true. “I think there’s always public alarm toward the most shocking images, but that doesn’t get at the structural issue,” Nofil says. “How do you move beyond just these specific flashes of violence? And how do you transition that into raising larger questions about the validity of the immigration system as a whole, of borders as a whole and of people’s ability to seek asylum?”

Write to Jasmine Aguilera at jasmine.aguilera@time.com.