How well is Derek Carr performing this season? Former Raiders...

by khbrknews.com 1 year ago1 year ago
0views
0


HENDERSON, Nev. — There is something oddly familiar about what Rich Gannon sees when the Las Vegas Raiders are on offense and Derek Carr is surveying the line of scrimmage.

Déjà vu, much, when it comes to similarities between Carr, who is in his fourth season in Jon Gruden’s offense, and Gannon, who was in his fourth year in the same scheme back in 2002?

“I see a lot of them,” Gannon said of the similarities. “I’m not comparing myself to Derek because we’re different players, but there’s a comfort level there. You can just tell when you watch him function in the huddle, at the line of scrimmage with the audibles and the checks and the protections, he’s all over it.

“If you look at all the quarterbacks in our league, I don’t know that anyone is doing more than he is right now at the line of scrimmage, with the menu of plays that he has at his disposal. I think Jon gives him pretty good freedom and flexibility to get in and out of plays and protections and checks and kills and all the different tools that they use to attack a defense. He’s really dialed in and he’s really a highly intelligent quarterback. You can tell when you watch him, and you hear it. You hear on the audio, you can hear some of the checks and the calls, which are familiar to me.”

It was in Gannon’s fourth season in Gruden’s system, kept in place after Gruden was traded to the Tampa Bay Buccaneers, that he had his NFL MVP season.

Carr, three games into his fourth season with Gruden and leading the league with 1,203 passing yards and the Raiders to their first 3-0 start since 2002, was just named the AFC Offensive Player of the Month. Yeah, the first offensive Raiders player so honored since (drum roll, please) Gannon.

Cue the “Twilight Zone” theme? Nah, fire up the meme of one Spiderman pointing at another Spiderman with ESPN’s Monday Night Football theme in the background as the Raiders head to SoFi Stadium to play the Los Angeles Chargers (8:15 p.m. ET, ESPN).

“Not to overthink it or anything, but Derek’s been in command since I’ve been here,” Gruden said. “We have a better team. We have better opportunities. Our defense is a big part of that.

“Repetition is the mother of learning. This guy’s had a million reps. And the emergence of [receivers Bryan] Edwards … [Hunter] Renfrow, [Henry] Ruggs, is important. But his command has always been off the charts. You give this guy a lot of opportunities, he’s going to have a lot of chances to succeed. I think he’s a great quarterback.”

Running back Peyton Barber, who did not join Las Vegas until Sept. 4 but assumed a starting role the past two weeks, concurs. Even as a newbie.

“I didn’t really know much about him,” Barber said. “I just knew he was a pretty good quarterback. But … he’s way better than I thought he was. Definitely. He’s a beast.”

Command might not have been an issue, but production has no doubt improved, as Carr is lighting up the stat sheet.

Consider: Dating back to Week 16 last season, Carr has passed for at least 325 yards in five consecutive games, tied for the second-longest such streak in NFL history with Drew Brees (2011) and Kurt Warner (2000 and 2008). If he does it again against the Chargers, he will join (another drumroll, please) Gannon, who did it in six straight in 2002.

And while he is going for his sixth consecutive game against the Chargers without an interception, Carr can also become the first player in league history with 375-plus passing yards and two-plus TD passes in each of his team’s first four games of a season.

If early returns are any indication, Carr has hit a real groove in understanding and implementing the Gruden system.

“From Year 1? For sure. Absolutely,” Carr said of his improved command of the offense. “We’re able to take more chances.

“I feel like I’ve been in command the last two or three years of this offense. But when you win, this is the kind of cool stuff that happens.”

It has all added up to the Raiders getting off to their first 3-0 start since their Super Bowl season of 2002.

“All the onus is on the quarterback to really be the air traffic controller,” Gannon said of Gruden’s offense. “To process the information, to be able to recognize a front and a coverage or a pressure scheme to get out of a bad play into a good one. To be able to change the protection. Jon’s very detailed in terms of what he expects and Derek has really impressed me.

“It speaks to Derek’s ability to process a large volume of information, quickly and efficiently.”

As Gannon said, Gruden and Carr are on a “different level” from what other teams are doing considering the volume of the playbook and the speed at which they are playing.

Apples and oranges, perhaps, but they both grow from trees, right? 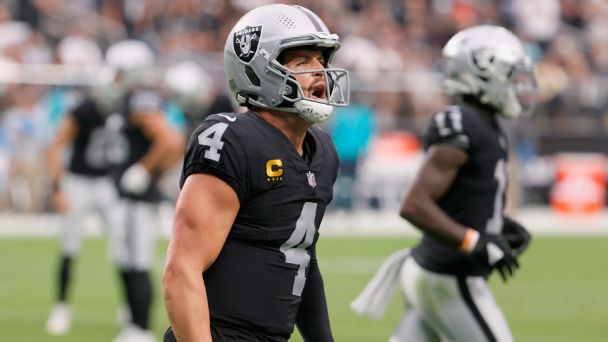 But as Carr evolves into a suddenly underrated quarterback, Gannon sees another similarity in Carr’s familiarity.

“The more and more dialed in I got, Jon knew who I was, what I do well, what I didn’t do as well, what I liked, what I wasn’t comfortable with,” Gannon said. “I understood him, a better sense of how he calls games. In certain situations.”

It got to the point where Gannon would anticipate the play being sent in from the sideline.

“He’d start the call,” Gannon recalled, “and I’d finish it.”

Carr smiled at the notion.

“Always a work in progress,” Carr said. “I don’t want to say we’re there, because I never want to feel like you’ve made it. But there are times as soon as he [Gruden] starts calling it, I’m already calling it in the huddle. We’re breaking the huddle and he’s still calling it on the headset.”

And it’s in those in-game conversations between QB and coach when communication becomes anticipation, which leads to the QB asking that all-important question — why?

In a respectful manner, of course.

“I think that’s where Derek is now — understanding the why is so important,” Gannon said.

“‘We just called double-post down in the red zone. OK, well, why did he call it? It’s first-and-10, what’s he thinking? He must think it’s going to be some form of three-deep coverage.’ Or, ‘Hey, we called 358 X Sluggo Z seam. Why is he calling it? Oh, he must be expecting pressure. But if they send a three-man rush and drop eight into coverage, that’s not a good play.’

“But Jon does such a good job he doesn’t leave anything to chance anymore. So rather than just call a play and hope you get the right front in coverage, they’ve taken it to another level where they’ve got multiple calls to address multiple looks and situations.”

And it has happened with a banged-up O-line and Pro Bowl running back Josh Jacobs missing the past two games with an ankle injury.

“[Tight end Darren] Waller is the X factor,” Gannon said. “You get [Jacobs] back, get him rolling, get the offensive line playing well, this is a team that, I think, can do something.”

To paraphrase Carr, the lauding comes with the winning. And trust.

“Those little things, we feel like we’re in a good place,” Carr said. “He’s just some coach from Dayton and I’m just some quarterback from Fresno. We’re just trying to make it.”